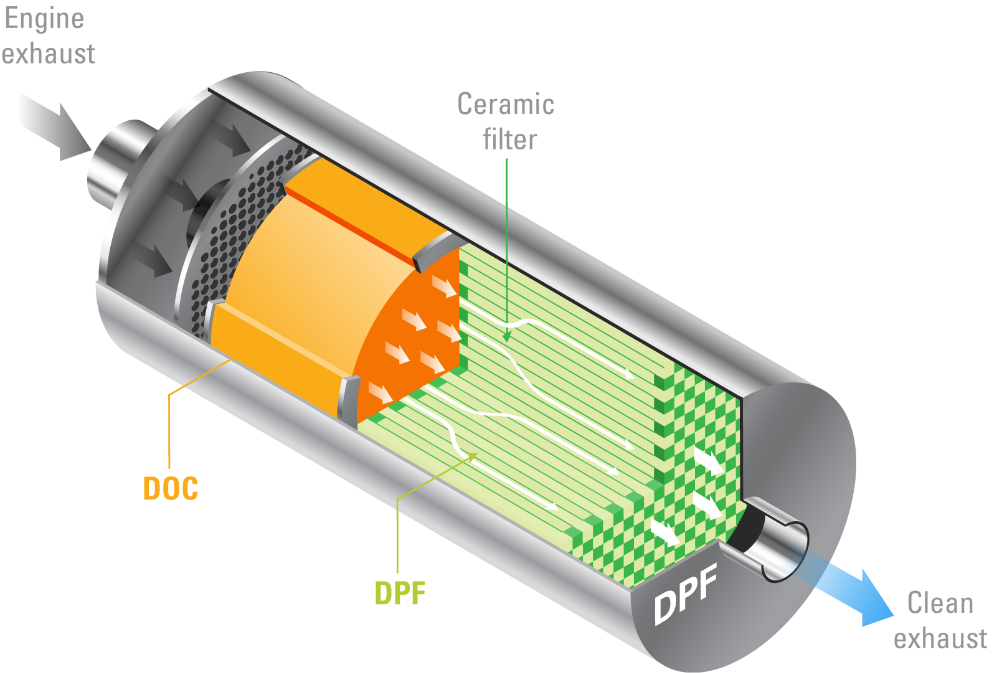 Triangle Fleet Services can provide regularly scheduled maintenance on your DPF.   Here is a brief explanation of this system and why it’s important to keep it in good working condition.

What is a DPF?

As the exhaust gasses pass through the filter, it captures somewhere between 85%-100% of diesel particulate matter (DPM). The filter removes a lot of the DPM—however, over time, soot builds up in the DPF filter walls.

DPF maintenance is relatively straightforward. A warning light usually shows up, indicating it is time to literally burn out the accumulated soot called regeneration. A DPF regen occurs when the trapped particulates heat up enough to combust and turn to ash. The built-up soot is then removed as gaseous carbon dioxide.

Oftentimes, blocked diesel particulate filters are caused when truck is ran for short distances at low speeds because the truck is unable to meet the requirements for the filter to clean itself.

What is a DPF Regen?

A DPF Regen is the process by which the soot within a diesel particulate filter (DPF) is converted to ash through the use of heat, chemical reaction and or electricity.

The key to maintaining a DPF is to ensure it is able to regenerate when it fills with soot, this will trigger a warning light which will appear on the dash.

Regeneration may happen one of three ways: passive, active, or forced.

Passive regeneration happens automatically. Once the exhaust temperature reaches a certain point—such as driving at high speeds—the built-up matter in the DPF turns to ash.

Passive regeneration occurs as the vehicle is driven normally under load; the driver is not aware that it is happening. It may not always keep the DPF clean over the course of the workday, so the filter may have to undergo active regeneration.

Active regeneration happens when changes in engine operation are required to get the Engine Control Module (ECM) to burn out and/or some catalyst is introduced. This is common among trucks with a lighter duty cycle, because soot accumulates while idling or going slowly through traffic.

One active regeneration method involves the ECM tweaking engine parameters to increase the exhaust temperature. The ECM then switches on an extra fuel injector that shoots fuel into the exhaust stream. This fuel reacts with a catalyst and burns the built-up soot out of the DPF. Newer engines allow for different methods of regeneration, even while “parked” or in neutral.

Is There Maintenance for a DPF?

At about 85% soot capacity and above, the DPF will need to be either removed and cleaned or the filter will need to be replaced. Most manufacturers recommend cleaning the DPF every 150,000 to 300,000 miles to remove the accumulated ash. At Triangle Fleet Services, we are able to clean your DPF at a fraction of the cost of a new filter. A new DPF filter can cost between $3,000-$10,000. You’ll need to clean the DPF every 150,000 to 300,000 miles to remove accumulated ash. Making sure the truck is on a regular preventive maintenance program will help ensure the long life of the DPF, along with regularly replacing oil, air filters and fuel filters.